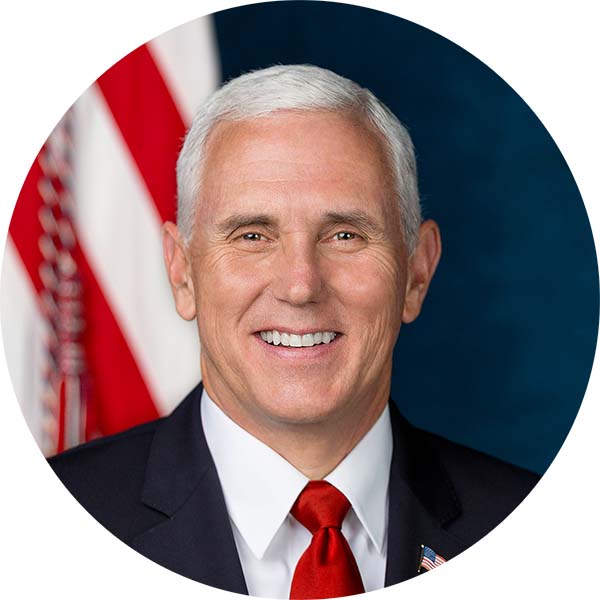 Michael R. Pence, 48th Vice President of the United States, was born in Columbus, Indiana on June 7, 1959 as one of six children born to Edward and Nancy Pence. As a young boy, he had a front row seat to the American Dream. The family ran a successful convenience store business in their small Indiana town. Experiencing this nurtured the future Vice President’s belief in the importance of hard work, faith, and family.

Pence earned his bachelor’s degree in history from Hanover College in 1981. While there, he embraced his Christian faith which remains the driving force in his life. He later attended Indiana University School of Law and met the love of his life, Karen. After graduating, Pence practiced law, led the Indiana Policy Review Foundation, and began hosting The Mike Pence Show, a syndicated talk radio show and a weekly television public affairs program in Indiana.

Growing up in Indiana, surrounded by good, hardworking Hoosiers, Pence always knew that he needed to give back to the state and the country that had given him so much. In 2000, he launched a successful bid for his local congressional seat, entering the United States House of Representatives at the age of 40.

The people of east-central Indiana elected Pence six times to represent them in Congress. On Capitol Hill, he established himself as a champion of limited government, fiscal responsibility, economic development, educational opportunity, and the U.S. Constitution. His colleagues quickly recognized his leadership ability and unanimously elected him to serve as Chairman of the House Republican Study Committee and House Republican Conference Chairman. In this role, Pence worked to make government’s role smaller and more effective by reducing spending and returning power to state and local governments.

In 2013, Pence left the nation’s capital when Hoosiers elected him the 50th Governor of Indiana. He brought the same limited government and low-tax philosophy to the Indiana Statehouse. As Governor, he enacted the largest income tax cut in Indiana history, lowering individual income tax rates, the business personal property tax, and the corporate income tax in order to strengthen the State’s competitive edge and attract new investment and good-paying jobs. Due to his relentless focus on jobs, the state’s unemployment rate fell by half during his four years in office, and at the end of his term, more Hoosiers were working than at any point in the state’s 200-year history.

As Governor of Indiana, Pence increased school funding, expanded school choice, and created the first statefunded Pre-K plan in Indiana history. He made career and technical education a priority in every high school. Under his leadership, Indiana, known as “The Crossroads of America,” invested more than $800 million in new money for roads and bridges across the state. Despite the record tax cuts and new investments in roads and schools, the state remained fiscally responsible, as Pence worked with members of the Indiana General Assembly to pass two honestly balanced budgets that left the state with strong reserves and AAA credit ratings that were the envy of the nation.

Pence played a very active role in the Vice Presidency under President Donald Trump, achieving a broad array of legislative accomplishments. He also excelled at articulating the administration’s agenda locally as he traveled the nation as well as internationally, representing The United States of America at multiple conferences held in Asia, the Indo-Pacific, the Middle East, and South America. While Pence was in office, America renewed its commitment to space exploration, reviving the National Space Council of which Pence acted as Chairman. Under Vice President Pence’s leadership, the National Space Council enacted a new National Space Policy and named 18 NASA astronauts to the Artemis Team. Vice President Pence also led the White House Coronavirus Task Force, combatting the worldwide COVID-19 pandemic by driving American innovation in testing, medical supplies, therapeutics, and the development of safe vaccines, which was accomplished in groundbreaking time through Operation Warp Speed.

Mike and Karen Pence have been married since 1985 and are proud parents to three children: Michael, who is a Captain in the United States Marine Corps and married to Sarah; Charlotte, who is a writer and married to Henry, a United States Navy lieutenant; and Audrey, who practices law in Washington, D.C. and is married to Dan. Former Vice President Pence remains grateful for the grace of God, the love and support of his family, and the blessings of liberty that are every American’s birthright.